When we design an electric vehicle, some questions appear about the requirements needed to the development. Normally, the vehicle is designed with a specific objective, be it for urban use, risky environments, freight transport or other activities. This use and the characteristics of the vehicle will largely determine the requirements.

For the sizing of the components, we start from a series of parameters that have to be estimated, such as the total vehicle mass and its drag. Depending on the application or the desired precision in sizing, complexities can be included in the simulation model, such as the variation of the rolling coefficient of the tire with the internal pressure of the tire and the speed of the vehicle, or regenerative braking.

Predefined homologation cycles are used in Europe such as WLTP for cars, WMTC for motorcycles. These cycles give the speed values as a function of the time.

Once the speed characteristic curve to be taken as a reference is known, the simulation can be configured to know the range of the vehicle. One strategy to follow is to specify a battery capacity and analyse the duration of the charge in terms of mileage.

For the range simulation, the way to put it is through an analysis of the forces that intervene in the vehicle:

As can be seen, this force is critical in sizing a vehicle at high speeds. It is easily distinguished when riding a motorcycle. When we are traveling at higher speeds, the force exerted by the air on the driver begins to be high, because it increases proportionally to the square of the speed.

The reality is that this coefficient is not constant. It depends on the tire pressure, vehicle speed and vertical load on it, but as a first approximation to a sizing it is acceptable.

Once the forces involved in a vehicle are known, it is assumed that the sum of the resistive forces(drag force + rag rolling resistance + inertial force) has to be equal to the traction force that is carried out on the vehicle by the electric motor.

Therefore, analysing the above and considering the simplifications and knowing that power is force multiplied by speed:

With this initial simulation, it is possible to obtain a value of the consumption of the vehicle, as well as an approximate figure of the range of the same.

Another of the values that are usually of interest in the initial design processes of a powertrain, is usually the maximum speed that the vehicle can reach. In this case, this maximum speed will be determined by the maximum power that the motor can supply continuously, to maintain this speed.

The way to obtain this power value is by taking into account the resistance that the vehicle supposes to riding at constant maximum speed (therefore the acceleration would be 0).

Below, a script it is shown in order to obtain the speed and the power required using Python language:

Once the simulation is executed, it generates a plot where we can see the maximum speed values for power values:

In the simulation, we can see the influence of the vehicle mass in the maximum speed or in the improvements in the vehicle aerodynamics when we change the values and analyse the power.

Once the simulations are done, the sizing can provide:

These points give the possibility of making a motor and battery selection. This first sizing stage is essential to give an approximation on possible components and general costs. Subsequently, more elaborate simulations should be carried out with the specific data of the chosen components, verifying other data of interest such as sprint acceleration, performance, losses in wires…

Electric vehicles: Mobility beyond what is established

Model Based Design in automotive

In previous articles we have mentioned the use of Model Based Design (MBD) at EEVAM, providing examples of its application, such as the simulation of control loops in the direction system... Read more… 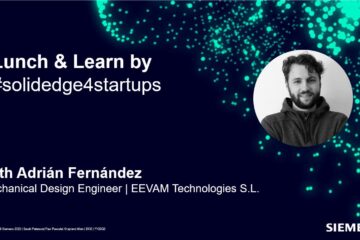 On September 8th EEVAM was joined the Lunch&Learn event created by SIEMENS as a part of our collaboration in their startup program... Read more…

Thank you for your interest!

This link will also be sent to you via email. Enjoy!